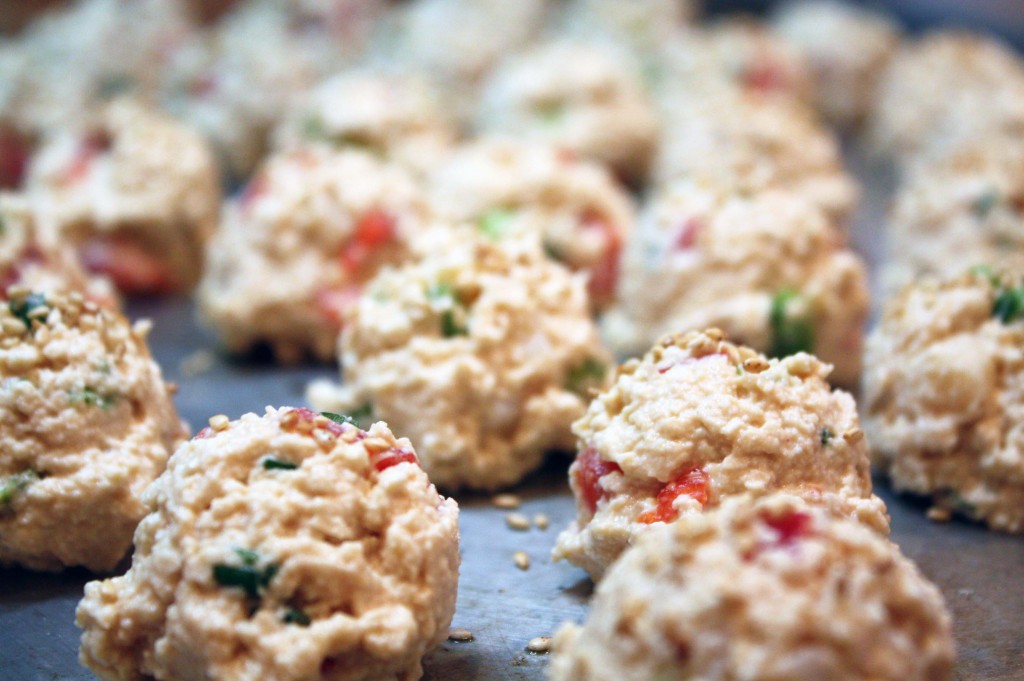 I started thinking about recipes that I love, and make all the time. The tofu balls above are from the cookbook Tofu Cookery by Louise Hagler. It’s a fantastic book, and I can never get enough of these little babbies. There’s a new 25th Anniversary edition of the book, which I really like because not only are there new recipes, but it has updated recipe suggestions, such as an option for using flax meal instead of flour in the tofu balls. I also add a hefty dose of grated fresh ginger, minced garlic and some Sriracha too. I also like to roll the unbaked balls in untoasted sesame seeds, which give them a little extra sesame flavor. After baking, instead of covering them in the suggested sauce, I make dipping sauces to serve on the side. It’s like having dim sum for dinner. Yummy!

Another recipe that I’m crazy about lately, is the Caesar dressing from The Bold Vegetarian Chef cookbook. My friend Kittee recommended that I give it a try, and I’ve been hooked ever since! It’s so frickin’ delicious, that I whip up a double batch, and keep it in the fridge in a canning jar. I love to dip cut veggies in it for a snack, but it’s also crazy good on chopped romaine too. I would post the recipe, but I don’t like to do that without permission from the author.

That’s just a couple that I’ve been reaching for and craving lately. I also find that I cook from Vegan Diner… a lot. It’s really fun to have so many of my go-to recipes in one book.

Oh, and talking about recipes, there’s a fabulous new vegan and gluten-free website that just launched this week. It’s got some awesome recipes, picture pictorials and all kinds of other great stuff. Plus, some of my favorite peeps are the masterminds behind the site, so go check it out! Even if you’re not gluten-free or vegan.

Thanks for stopping by!

Our candle and maker workshops

©Julie Hasson and Julie’s Kitchenette, 2019. Unauthorized use and/or duplication of this material without express and written permission from this blog’s author and/or owner is strictly prohibited. Excerpts and links may be used, provided that full and clear credit is given to Julie Hasson and Julie’s Kitchenette with appropriate and specific direction to the original content.