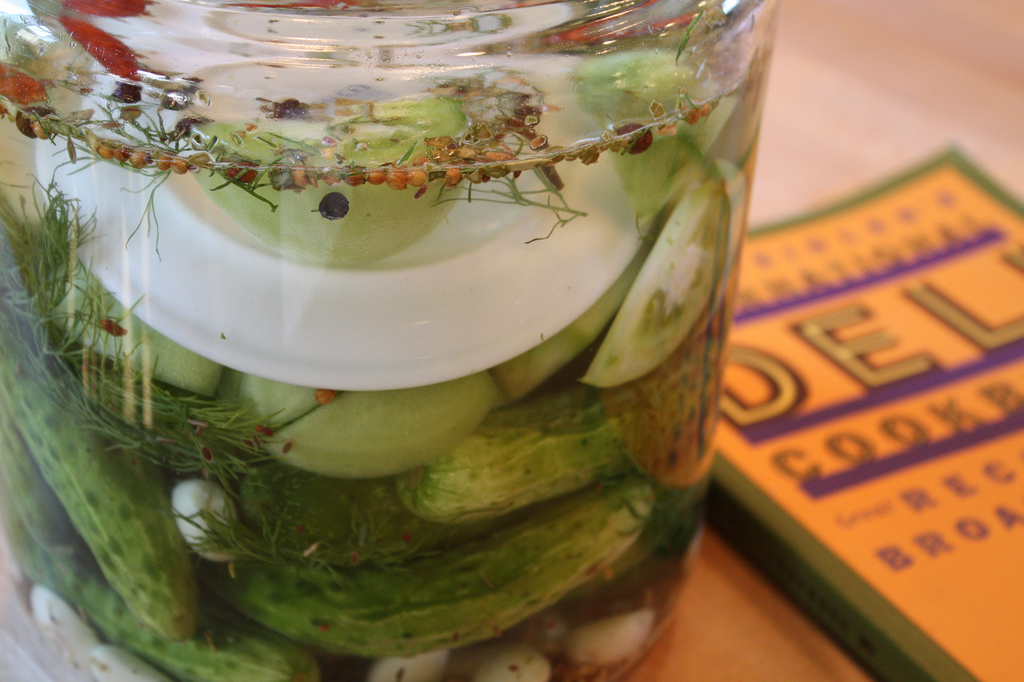 As you can probably tell by now, I love making food from scratch. It’s so satisfying and fun. It can be customized to your palate and tastes, and is better than anything you could buy at a store.

A couple of months back, my daughter and I were at a local farm, paying for the buckets of fresh berries that we had just picked, when we spied a big basket of fresh, crisp pickling cukes. Sydney decided that she wanted me to show her how to make real Kosher dills, the kind you find table-side in Jewish delis. How could I refuse? First off, I’m a pickle fiend and secondly, she was leaving half the pickles with me.

Here’s the recipe that I make almost every summer. These pickles bare no resemblance to the softer, vinegar-flavored pickles found in grocery stores. These are the real deal, true deli-style salt-brined Kosher dill pickles. It took me a long time to find a recipe that fit this bill. I am happy to say though that it was not in vain.

In the early 1990’s a modern, hip-style deli opened in Santa Monica, California. The concept of the Broadway Deli was Jewish deli meets hip eatery. They had lots of inspired dishes on their menu, artisan breads and great desserts. In 1994, they came out with a cookbook, and right there in it’s pages was the recipe that I had been searching for: true, salt-brined Kosher dills.

I don’t think that the cookbook is any longer in print, so I’m going to post the recipe here. Feel free to add extra garlic and even dried or fresh chili peppers. We even tossed in a few sliced green tomatoes. I hope that you enjoy them as much as we do. They’re really quick and easy to make, and can be stored in your fridge for quite a while.

Broadway Deli’s Quick Dill Pickles
(Makes 10 to 12 pickles)
These pickles taste just like the one’s grandma used to make, only they’re faster and easier to prepare. To transform bumpy little cucumbers into crisp, garlicky dill pickles, place all of the ingredients in a jar, cover, and shake. In four days you’ll have the best dill pickles you’ve ever tasted.

1. Pour boiling water into a 1-gallon canning jar and pour out. Drop pickling spices and 3 of the garlic cloves into the bottom of the jar. Arrange cucumbers in the jar to fill just up to the neck. Top with salt, remaining 3 garlic cloves, and dill. Add cold water to cover. Cover securely with the lid. Shake well and let stand for 3 to 4 days in a cool, dark place before serving.
2. Refrigerate after 4 days to stop the pickling process. The pickles will keep for several weeks, covered, in the refrigerator.

P.S. If you’re wondering why there is a plate in my pickle jar (in the photo), it’s because I doubled the recipe and topped the cukes with a plate. This helps to keep the pickles submerged in the brine.